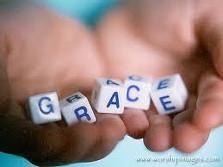 Spiritual leadership Principle: This principle says that leaders need the grace of God. Especially when they make mistakes and fail. When a leader makes a commitment and fails to follow through with it, they should repent and ask for forgiveness to both God and the person they made it with. When grace is needed a leader needs to get back up and keep going. When leaders get up after a failure they have a better chance of succeeding. The failures of the past are often the stepping stone of the future. Leaders can learn and grow through failures. A leader needs to understand and walk in the grace that is given by God. God wants leaders to be a receiver and giver of grace.

Peter was a disciple of Jesus for over 3 years. During that time the disciples traveled, ate, spoke, joked, and was with Jesus on a daily basis. Also during that time the disciples saw Jesus teach and heal. Most of the those days were spent with one another. With the amount of time they spent together, the disciples and Jesus were close and knew each other well. They built a very deep relationship between themselves. In fact Jesus trained and developed the disciples by teaching them and setting the example. Being with each other that much and knowing each other’s strengths and weaknesses brought both times of joy and frustration. Grace was needed throughout those years together.

Peter most of all needed the grace of God during those times. He was the type of person who always seemed to speak up and get into trouble. Peter would be the first person to say something about a situation or to ask Jesus a question that others would never ask. Peter was the bold person that spoke before thinking things through. This can be seen in the gospel of Matthew,

31 “On the way, Jesus told them, “Tonight all of you will desert me. For the Scriptures say,’ God will strike the Shepherd, and the sheep of the flock will be scattered.’32 But after I have been raised from the dead, I will go ahead of you to Galilee and meet you there.” 33 Peter declared, “Even if everyone else deserts you, I will never desert you.” 34 Jesus replied, “I tell you the truth, Peter—this very night, before the rooster crows, you will deny three times that you even know me.” 35 “No!” Peter insisted. “Even if I have to die with you, I will never deny you!” And all the other disciples vowed the same.”(NLT-Bible gateway.com)

Without fully understanding what Jesus was talking about Peter spoke up and made a commitment by saying he would follow Jesus and not deny Him. Let me give one point that is off topic, Peter was a leader within this circle of disciples because he had influence among them. After he made the commitment to never deny Jesus the other disciples followed along with what he said and vowed the same thing. What a leader says could have an impact on what others say and do. Without yet knowing it Peter and the other disciples would need an extra dose of God’s grace. Here is what happened later on in the chapter,

69 Meanwhile, Peter was sitting outside in the courtyard. A servant girl came over and said to him, “You were one of those with Jesus the Galilean.” 70 But Peter denied it in front of everyone. “I don’t know what you’re talking about,” he said. 71 Later, out by the gate, another servant girl noticed him and said to those standing around, “This man was with Jesus of Nazareth.” 72 Again Peter denied it, this time with an oath. “I don’t even know the man,” he said. 73 A little later some of the other bystanders came over to Peter and said, “You must be one of them; we can tell by your Galilean accent.” 74 Peter swore, “A curse on me if I’m lying—I don’t know the man!” And immediately the rooster crowed. 75 Suddenly, Jesus’ words flashed through Peter’s mind: “Before the rooster crows, you will deny three times that you even know me.” And he went away, weeping bitterly.(NLT-biblegateway.com)

Grace means, “to forgive, cancel (a debt) and favor”(the Greek-English concordance, John R. Kohlenberger2) and is exactly what Peter needed. After the rooster crowed he knew he failed and showed he needed grace by breaking down and crying and feeling remorseful for what he had done. After Jesus had resurrected, he went back to Peter and showed him grace and forgave the commitment that he had made and failed to follow through with. No matter how bad Peter had failed during or after Jesus was on earth, Jesus was willing to forgive and show grace.

Peter like all leaders need to have that type of grace upon our life. No matter what we say or how bad we fail we need to know that God’s grace can cover us. We need to know that even in the mist of failure God is able to show grace. Peter used this grace to successfully expand the kingdom of God. Leaders should remember that grace in failure equals future success. The grace that was shown to Peter equaled success and the grace that is shown to us could equal to our success. But we need to remember to grab a hold of grace during times of failure.

Peter like all leaders need and are able to have that type of grace in spite of failure. Peter was taught that even in the midst of failure God is able to show grace. A leader needs to choose to use their failures as stepping stones, this can be done through the grace God shows upon his people. If you are a leader you will have to grow through God’s grace when you fail.

Here is the process Peter went through in his failed commitment and what we can learn from it so that we can be successful:

First, Peter made a commitment by saying that he would not deny Jesus. This could be any type of commitment that we would make with someone. No matter if it was a small or large commitment made between a manager or business partner.

Third, After denying Jesus Peter heard the rooster crow. Leaders need to realize they broke the commitment, which is sometimes hard to notice.

Fourth, Peter went to weep; which is a sign of repentance. When we fail in a commitment we have to go to the people that we broke it with, ask their forgiveness and make things right. If it was with God we need to have the same response that Peter had.

Fifth, Peter received grace when Jesus came and restored him. We need to be humble and be in a place to receive grace. Leaders need to ask forgiveness and then live with whatever circumstances come.

Lastly, Peter pursued the commitment by building the church and telling others about Christ. We need to pursue the commitment again and learn from past failures and mistakes.

What grace does for leaders:

It lifts us up from a failure: Knowing that we have grace can lift us up and out of a failure. It also gives us encouragement to try again and to keep going. A lot of times people are down for the count the first time they encounter failure, that is due to them not being able to let grace lift them up. Grace can and will lift us out of failures, because if we understand that we have grace to fail, there is no reason to stay where we are at. Grace can raise a leader up and out of a failure.

It gives us an example of how to treat others: The grace in a leader’s life can help the leader show grace to others. Leaders need to understand the importance of showing grace to others. A leader will never receive God’s grace if they are not showing grace themselves. Grace upon a leader’s life sets the example of how they should treat others. Leader’s first need grace and then need to show grace to the people who follow them.

It shows us that we can’t lead without it: Grace is something a leader needs in order to be successful. We can’t reach our maximum potential without God’s grace in our lives. God has shown grace to us in the midst of failures and expects us to be leaders who show it as well. Leaders who show and have grace can influence other people. Leader’s need to know that they can’t lead without grace.

* Leadership principle: As a leader you need the grace of God during times of failure.

Please note: I reserve the right to delete comments that are offensive or off-topic.

Get Your Free Quote Books

Sign up to receive my blog posts via e-mail and get a FREE copy of these two quote e-books: Success Quotes, Foundational Elements for Lasting Success AND Characteristics and Qualities of a Great Leader.

The Little Book of Personal Growth